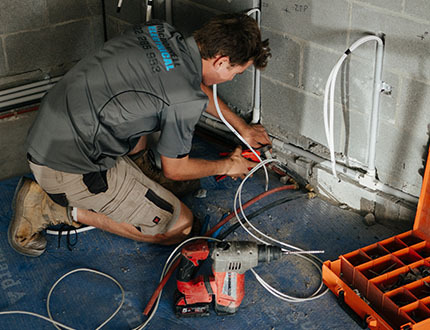 In today’s trade industries, technical automation is a hot topic, and it’s often painted as a ‘rise of the machines’ that will put an end to jobs. I believe however, that it is more about shifting skills to meet changing demands – and a big part of this is how we prepare young people for evolving trade careers.

Anxiety about technological change in our workplace is not new; tensions were similar during the Industrial Revolution in the 19th Century. While the pace of change is far more rapid today, we have an advantage – access to a level of learning and information that has never been seen before. The key lies in harnessing this to help the next generation navigate increasing automation.

Industries, jobs and skillsets are evolving

We’ve already seen a significant shift towards automation and digitisation in many of our traditional trade industries. Consider an electrician, for example. Only a decade ago, most of their work would have been on physical wiring and hardware. However, today’s homes are increasingly ‘smart’ with networked appliances and even light globes. This trend means that to thrive, today’s electricians – and indeed, those of tomorrow, need to understand the technology that drives these networks. The technology hasn’t replaced the electrician’s role, but it certainly has changed it, and the industry will evolve accordingly.

These evolutions are occurring across many trades, from automotive to plumbing. I’ve even seen a robot that can lay bricks, working faster than a human could and getting them perfectly straight. But I still don’t believe that it will replace bricklayers entirely – the job will simply evolve, potentially becoming more of a finely-tuned craft. It will also create new jobs in the industry, as robots can’t work without people to program and maintain them.

There is however, a burning platform to prepare our young people for what’s next in the world of work. For me, that’s about striking a balance between technical, STEM and soft skill development during the school years.

As identified by the World Economic Forum, the top three skills of the future are analytical thinking, active learning, and complex problem-solving. In addition, creativity, resilience and leadership also made it into the top ten. These are all soft skills – and one of the key reasons they are so critical is that robots can’t easily replace them.

These uniquely human skills will ensure we still need people in our workplaces, even as those jobs evolve. There are numerous stories of robots failing in situations that require these skills. While some examples are amusing — such as an AI-powered football tracking camera that couldn’t distinguish between the ball and a bald linesman’s head — others are concerning, such as the Amazon AI recruitment tool that repeated poor recruitment patterns.

By embedding soft skill development into the school curriculum, we will be giving our young people a head start as they plunge into a future where change is likely to be the only constant.

School-based apprenticeships and traineeships could play an important role

The trend of young people leaving school in Year 10 to pursue a trade is a dying one. Increasingly, trade employers want HSC graduates. By studying for their HSC, the next generation of tradespeople will have that extra exposure to STEM subjects that will help them navigate increasing automation.

But there is a trade-off. By completing HSC studies, there is a delay in completing apprenticeships and developing those critical vocational skills. The answer may lie in a vocational training model that in my opinion, is under-utilised –  the School-Based Apprenticeship/Traineeship.

This model gives students the opportunity to both continue school studies and start their apprenticeship simultaneously. With this model, aspiring tradespeople get the best of both worlds and will be well prepared for their future careers.

There is no denying that the future will be automated even for our most traditional trades.  However, we also have a fantastic opportunity to prepare our young people for what’s next. I look forward to seeing how our education systems at all levels adapt, so Australia can meet the challenges head-on.