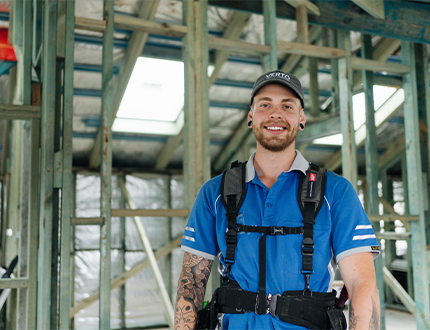 Before handing it down late last month, Treasurer Jim Chalmers described his first budget as “solid, sensible and suited to the times”. And on 25 October, he lived up to this promise with a budget that many describe as “restrained”.

It may have been restrained; however, there were some great outcomes for vocational education and training (VET), apprenticeships and Australia’s regional areas.

Being born and bred in the country, I am well aware of the often untapped potential in our regions. And I was pleased to see this potential being recognised by the government in this budget with the Growing Regions Program.

While I am excited by the possibilities and how this could transform Australia’s regional centres, I am conscious of one potential obstacle – finding the people with the skills to complete these projects.

According to a report by industry consultancy Arcadis, construction vacancies have risen by 80% since late 2019. The consultancy also finds that the skills shortage will likely “bite the hardest in 2023 and 2024 when major projects are expected to land”.

So, it’s not surprising that the budget also included measures to address skill shortages, including a raft of free VET places.

The government has pledged $871.8 million for 480,000 fee-free VET places over the next five years, with around 180,000 of those to be realised next year alone. The places will target the industries and regions hardest hit by talent shortages.

However, what those industries and regions will be is unknown at the time of writing. It’s all to be revealed in the forthcoming National Skills Agreement.

This initiative is certainly welcome in response to growing skills shortages. However, in my opinion, it cannot be a standalone measure.

Cost isn’t the only barrier to study, and when it comes to VET, often not the biggest. In much of our research and anecdotal experience, awareness and perception are some of the most significant barriers.

I’d like to see this initiative bolstered with resources to increase awareness and change perceptions of VET among school students and their families, recent graduates and job seekers. It won’t matter how many free places are available if people aren’t aware of and/or interested in the associated career paths.

Apprenticeships are a critical youth employment vehicle, and I was interested to see the government announcing measures to improve completion rates in this budget. But it is important to note that this measure is only for those engaged in the clean energy space under the New Energy Program.

The initiative is targeted at apprentices themselves, with support payments of up to $10,000. The lower wages in the early years of an apprenticeship are already a significant cause of dropout. This challenge may be exacerbated as the cost of living increases, so these support payments are an important step.

Clean energy is a rapidly growing area and one where today’s apprentices will play a significant role in tomorrow’s outcomes for all of us. So, I am excited to see how this initiative plays out and its role in growing this exciting space.

However, it’s not unsurprising to see industry groups calling for the return of the Boosting Apprenticeships Commencements (BAC) as it was a game-changer for employers and apprentices. Commencing under the previous government, BAC offered wage subsidies to eligible employers who took on new apprentices.

At VERTO alone, we saw a notable increase in eligible commencements during the program. It will be interesting to see if these support payments have a similar impact on completion rates.

So, while we may have seen a quieter budget, there have been some fantastic initiatives announced for the communities VERTO serves. I look forward to seeing these come to fruition over the coming months and beyond.

Whether you are an apprentice or looking for one, VERTO can help. Our experienced team of consultants can help you explore opportunities and subsidies available to you. Now is a great time to consider an apprenticeship, so get in touch to get started on 1300 4 VERTO (1300 483 786) or This email address is being protected from spambots. You need JavaScript enabled to view it..