How we can encourage more women into trade apprenticeships 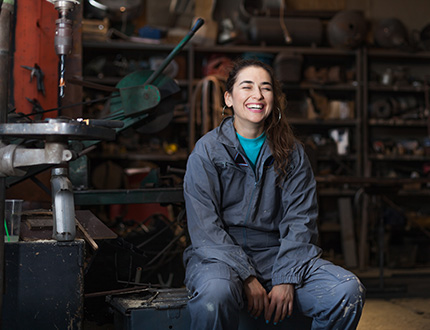 I have certainly seen anecdotal evidence of this at VERTO, but I was pleased to read recently that women are taking up more apprenticeships in the electrical trades than ever before, and in some areas, outpacing their male counterparts.

I've long been a supporter of increasing female participation across our traditional trades, for a number of reasons.

There are many positive outcomes

First and foremost, increasing gender diversity is a positive for any industry; it brings different perspectives to a workplace, and can change outdated cultures for the better. There are also numerous studies out there that suggest gender diversity increases productivity across the workforce, so it can be a win on that front too. Industries and businesses will benefit from attracting a wider range of applicants, particularly with skills shortages upon us in many trades.

From a job seeker perspective, encouraging more women into trades will open up a wider range of career prospects for female applicants. At a time when youth unemployment is high in many areas, and university graduates report finding it hard to get a job, opening up new career paths is certainly a good thing.

I also read with interest recently a study by Cornell University in the US, that found the difference between occupations and industries in which men and women work accounts for more than half of the gender pay gap.

There are many reasons why we should encourage more women into apprenticeships; the challenge lies in how we overcome social perceptions and encourage industries to make cultural changes that will see more women choose and go on to have successful careers in our trades.

In my mind, one of the biggest barriers to female participation in our trades is social perception. Some industries are still viewed by wider society as being 'masculine', and this is impacting the career choice of female school leavers. There is research out there that suggests, in some cases, parents are actively talking their daughters out of taking on trades, with the main reasons cited being added risks in a male environment, 'dirty' work and heavy lifting.

While these shouldn’t be barriers anyway, it is worth noting that our trades are rapidly changing. Cultures are in transition, and the actual work itself is different to what it was even ten years ago. There is more and more technical equipment involved and trades increasingly require a level of mathematics, technology and computer skills. Just think about the car, for instance, what was once fixed with a wrench, is now an onboard computer that needs a different skillset to solve problems.

I talked recently about the importance of parents talking to their teenagers about the wide-range of career options out there and this certainly applies to young women and trades too.  There are some fantastic stories out there of women who choose trade apprenticeships. One that comes to mind for me is the story of Rachel Dudok, who achieved excellent marks at school, but didn’t want to go down the university path. She instead decided to take on an Aircraft Maintenance Engineer apprenticeship. It’s clear when you watch the video of Rachel talking about her role, that she loves her job and has a very fulfilling career.

Industries and businesses must support this transition

It's important that our traditional trades look internally to see why they aren't attracting more female candidates and understand what can be done to level the playing field. It's true that women are underrepresented in most, if not all, of these industries, so putting additional structures in place to support and grow female participation makes sense.

There are some great examples of recruitment programs out there, such as the Ausgrid Bright Spark program, which actively encourages female electrical apprentices, resulting in 75 per cent of a recent intake being women. These large-scale programsare something we should grow, but smaller businesses can support female tradespeople too, through one-to-one mentoring programs.

An example that comes to mind is a VERTO client, Rebecca Anne, who undertook a mechanical apprenticeship with a car dealership. To help her on her journey, she was mentored by an experienced female mechanic, who could act as a sounding board and help her navigate the challenges women in male-dominated industries can face.

Ongoing mentoring and creating an environment that supports women are key, in my opinion. I've spoken before about the power of mentoring for any apprentice, and I think this is truer than ever when it comes to women working in our traditional trades.

At VERTO, we see a number of female tradies who have rewarding and fulfilling careers in trade industries. An increase in gender diversity will only be a good thing for traditionally male-dominated industries, and I hope we can see more employers getting on board with programs that both attract and retain more female tradies now and into the future.