VERTO is an award winning, not-for-profit organisation assisting businesses and individuals with all their apprenticeship, employment and training needs. Our expertise covers a range of areas including Aboriginal services, Australian apprenticeships services, disability services, employment services and vocational training to help businesses, individuals and local industry to thrive. Our mission is to positively impact the lives of individuals and communities and we’ve built a track record of exemplary customer service over 35 years, built around an ethical approach.You'll find the team in over 40 locations across New South Wales.

How can we help?

Death of the Tradie: Will inconsistent funding models see an end to the Australian tradie?

Earlier this year, I read an article that suggested that without changes to funding in our Vocational Education and Training (VET) sector, we could well see the death of the Australian tradie. While this could be a little media sensationalism, it got me thinking that there is some truth in the noise. If funding models aren't changed, it may not be too far from reality.

Imagine, for a moment, a world without tradies – or even one with a serious shortage.  At an individual level, it would mean learning to do skilled labour in our own homes, such as fixing plumbing, or paying drastically inflated prices for a skilled tradesperson. On a broader scale, it’s fair to say the economy would be in dire straits. Tradies are the backbone of our economy and it's time to apply the Australian fair-go mentality to training the next generation.

According to figures from the National Centre for Vocational Education Research (NCVER), funding for VET courses reached its lowest ebb in a decade in 2017. This led to the subsequent Joyce review into the VET sector, which handed down recommendations for a simpler funding model in April 2019. These recommendations are being reviewed and actioned at a Federal Government level, but in my mind, the changes can't come soon enough.

Inconsistencies are a challenge

As it stands, funding for our VET sector is determined by state governments, which can lead to inconsistencies across different qualifications. According to NCVER, in 2018, qualifications in construction and plumbing services received funding of around $114 million in Victoria, $62 million in New South Wales, and $46 million in Queensland.  It's also worth noting that all three states saw a decline in funding for these qualifications between 2017 and 2018.

In my opinion, inconsistencies like these, across nationally-recognised qualifications, don't make a lot of sense; particularly for an industry that is worth around $116.7 billion to our economy each year.

Alongside these state-by-state variations, we also see inconsistent funding models across our higher education sector that can often leave VET looking like the poor cousin, when in reality it's critical to our future.

Consistent funding may be the answer

While the Joyce Review has made some worthwhile recommendations, and we can certainly see some light at the end of the tunnel, I'd also like to see a review that takes a look at the whole education sector.

The Bradley Review into the Higher Education sector, undertaken in 2008, suggested a number of reforms to better align funding for Australian university and VET qualifications. These recommendations included streamlining funding into a single higher education funding model that encompassed both university degrees and upper-level VET qualifications to ensure consistency.

The purpose of the review was to ensure that our education system was structured, funded and organised in a way that enabled Australia to compete in a globalised economy – a challenge that has only continued to grow.

With nine out of 10 jobs of the future requiring VET qualifications, it would be great to see these recommendations revisited, so that we can strengthen and future-proof our entire education system.

I've talked before about the need to collaborate across our education sector, and for me, it has become truer by the minute. It's in the best interests of individual students, the sector and the wider economy that we build a strong, unified higher education system.

A recent report by the Mitchell Institute and Victoria University noted the funding disparities and suggested a collaborative higher education sector could be the answer. The report states that:

Australia needs a more comprehensive, coherent and interconnected tertiary education sector that makes better use of both VET and higher education. This type of tertiary education will respond to challenges facing our students, rather than one based on outdated divisions between academic and vocational learning.

Having worked in the education sector for several decades, it's a sentiment I couldn’t support more. An education sector that collaborates closely, from school to VET and university, could give future generations access to the right learning at the right time, put an end to skill shortages, and allow Australia to compete in a global economy. 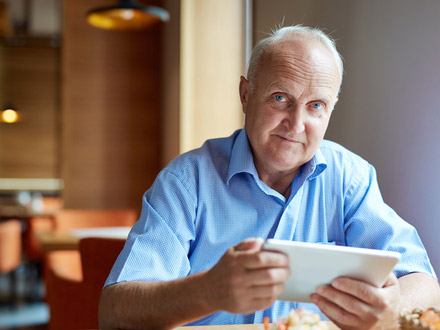 Seniors in the Bathurst region will be able to get up to date with the latest technology through VERTO’s Tech Savvy Seniors course.

Commencing Monday February 10, 2020 the course is aimed at providing seniors with the opportunity to develop the skills and confidence they need to use technology for socialising, accessing important services or conducting personal business.

The course involves seven sessions which include information on computers, smartphones, tablets, social media, cyber safety, the internet, email and online banking. Participants are able to bring their own personal devices to become familiar with processes they will then use at home.

VERTO has run the course for over four years now, and by the end of the upcoming lessons will have delivered the course to over 220 senior participants in the Central West, Far West and Orana.

Commenting on the course, VERTO chief executive, Ron Maxwell, said, “It is great to see so many seniors developing the skills they need to be able to keep in touch with family and friends, and retain their independence.”

“VERTO acknowledges that our world is evolving, and so we need to continue to develop our training programs to help older Australians to stay connected.”

The training is delivered through a partnership between the New South Wales Government and Telstra. The course is free of charge for eligible participants (participants must be over 60 years of age).

Session times: 9 am to 12pm or 1pm to 4pm (you will need to attend the same time session for all classes)

For more information or to enrol in the course, please contact VERTO on 1300 4 VERTO or This email address is being protected from spambots. You need JavaScript enabled to view it..

Charli worked with VERTO’s Bathurst team to help her connect with an employer that would understand her needs, but also nurture her obvious potential.

With the goals of completing a barista course and gaining employment in the hospitality industry, VERTO helped Charli secure an interview at her local McDonalds. Charli secured employment as a crew member in October 2018.

Charli has gone on to receive the ‘Employee of the Month’ award in January 2019, while also completing a Certificate III in retail. She accomplished both of these milestones while also working in her new role.

Even though Charli sometimes feels overwhelmed, she knows she is not alone in her employment journey after forming a strong relationship with the VERTO Employment Services team in Bathurst.

“I accept that I need support and VERTO has helped me get to where I want to be with my work and where I am in my life,” said Charli.

“VERTO have been there to listen, accept, and support me within my working day if I need anything at all.”

This attitude has helped Charli continue to kick goals, with her consultant Alyssa commenting on just how important it has been for her to continue to explore opportunities outside of her comfort-zone.

“Recently Charli presented a speech about her experiences in front of a large crowd, which was a huge achievement for her.” said Alyssa.

“I think this just proves that she is willing to challenge herself in every way possible in order to grow and we can expect to see more great things from Charli in this New Year.” 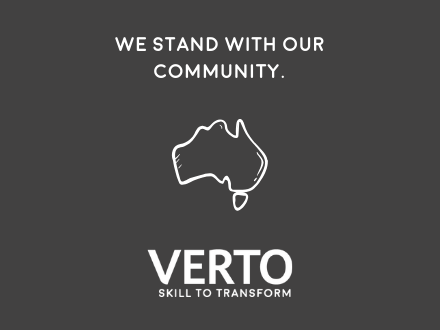 This is in addition to the charitable donations VERTO made to the Mid North Coast Bushfire Appeal (run by the Taree Lions Club) and BlazeAid late in 2019.

Mr. Maxwell said the entire VERTO team was saddened by the loss of life, homes, livestock and wildlife across the nation.

"As a not-for-profit, charitable organisation, VERTO understands the importance of giving back to our local communities," Mr. Maxwell said.

“Organisations like the Australian Red Cross and the NSW Rural Fire Service, (which is manned by over 72,000 volunteer firefighters), are doing a remarkable job of saving lives, protecting homes and helping locals to get back on their feet.

“We hope that our contribution will assist those in need at this devastating time,” Mr. Maxwell said.

VERTO is proud to work with