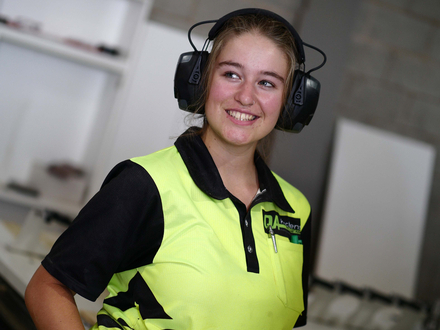 More than three-quarters of young females would not consider undertaking an apprenticeship, instead opting to attend university, according to a study released today from Year 13 and VERTO.

The research surveyed more than 1,000 females aged 15-24, in metropolitan and regional NSW, and revealed the most common reason cited for not considering an apprenticeship was to attend university (65%). More than one third responded that their schools did not promote trade careers for females.

“Perceptions of lower earning power, lack of encouragement and limited promotion of apprenticeships within schools and by parents, were all highlighted as significant barriers for females taking on apprenticeships,” Mr Maxwell said.

“In my opinion, the career guidance programs in our schools need to rethink the way trades are discussed, particularly with female students.

“There is a definite gender bias when it comes to talking about career options, and this research demonstrates that many female students aren’t informed properly about apprenticeship pathways, and often have limited access to trade-based subjects.

“This is also reflected in the discussions taking place at home, with many families not viewing trade careers as a viable option for young women.

“This is incredibly disappointing because Australia is currently suffering from a significant skills shortage,” Mr Maxwell added.

“Given that NSW is soon going to need a lot more highly skilled tradespeople as we recover from disasters such as bushfires, floods and the COVID-19 pandemic – now is the time to break down these barriers and smash these stereotypes because some of the most talented and hardworking tradespeople we employ at VERTO are female.”

“Systematic changes in our education system are on the horizon and this is evident in the latest findings from the review into senior secondary pathways where schools will now be putting a lot higher focus on VET which has highlighted the importance of VET in society,” Mr Phipps said.

“This will empower and enable more young women to see these opportunities across these industries as places they can have fulfilling careers.

“With the technological evolutions we’re seeing in these traditional trades it’s now becoming less about the distinction between traditional white and blue-collar worker and creating a ‘new-collar’ worker which can be more appealing to women.”