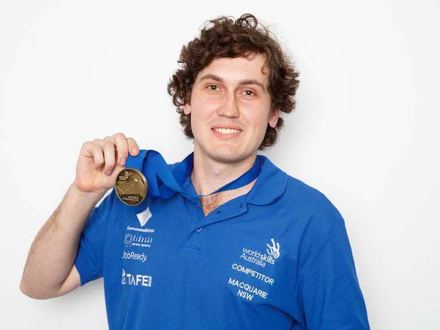 Competing in the Industrial Mechanics Millwright category, Mr Larkings will join a team of 40 people, including 15 competitors and 25 experts and officials, who will represent Australia at the international skills event.

The 15 young men and women, known as the Skillaroos, will compete against apprentices and trainees from 60 countries, in the hope of becoming world champions in their chosen trade or skill area.

The Skillaroos, all aged between 19 to 22, represent a wide range of trades and skills with the majority aligning with the National Skills Needs list, these include: Cloud Computing, Electrical Installations, Plumbing and Heating and Graphic Design Technology.

The 45th WorldSkills International Championship will bring together more than 1,600 young people, representing 60 countries and regions who will compete in 56 skill competitions from August 22-27.

Vocational education minister, Senator Michaelia Cash said the competitors demonstrated the quality of skills we have in Australia.

"Australia has one of the best reputations in the world for skills development," she said.

VERTO signed Clinton up to a Certificate III in Engineering- Mechanical Trade with Luke Cross Engineering and Rigging in Dubbo in 2016.