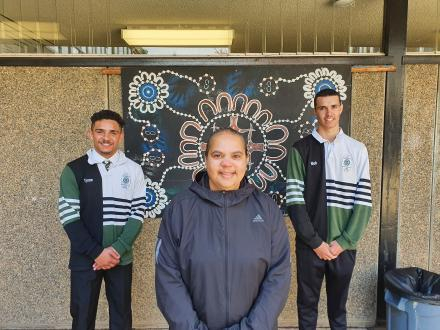 Tyren and Nick believe the support they received not only enhanced their cultural experience at school through dancing and Aboriginal studies classes, but helped them build inner strength and create strong community links, among many other benefits.

“I absolutely hated school when I started and was desperate to drop out as soon as I could in Year 10,” Vice Captain Nick said. “If it wasn’t for Aunty Mary, the VERTO Aboriginal Youth Leadership Program and the CRTHS teachers there’s no way that I would have stayed and graduated.”

Captain Tyren added, “I was the same. It’s funny now that I look back, the senior years were the best years at school and I’m so glad my teachers, Aunty Mary and other support from Clontarf Foundation helped me stay in school.”

Tyren and Nick’s decision to complete their HSC was well rewarded at their graduation ceremony. Tyren was awarded the highest marks in the school for Aboriginal Studies, and the CRTHS Prize for Leadership.

Nick’s awards included the highest marks in the school for mathematics one, The Rotary Club of Orange Daybreak Youth Service Above Self Award and the Archer Prize for Demonstrating Outstanding Leadership from an Indigenous Student.

Aunty Mary said, “It has been the best experience working with Tyren and Nick – I’m just so incredibly proud of them.

“I still remember when they started in Year 7. To see them now, I’m humbled to know we had a small impact on how far they have become and how they see themselves now - strong Aboriginal men.”

“I’m so grateful to be a part of their lives. They’re great people, great role models and have big futures ahead of them.”

For Tyren, he hopes that his future includes working with his local community in the sporting or community services field, while Nick has his eyes set on becoming an apprentice heavy diesel mechanic.

Either way, both students are keen to work with the next generation of young Aboriginal people and let their actions lead by example.

“I love dancing and expressing my cultural identity and I’m looking forward to teaching primary school students all of these things,” Tyren said.

“If I had just one message for the next generation of students it would be stay in school and make the most of it. The teachers are there to help, so build good relationships with them. It can be hard at times, but staying in school and graduating is definitely worth it,” Nick added.

As well as thanking Aunty Mary and the VERTO Aboriginal Youth Leadership Program for helping them graduate, Tyren and Nick also paid special mention to their parents, their adviser and Ab Studies Teacher Amy Morris, CRTHS Support Learning Officer Hayden Gibbs-O’Neill, and the team from the Clontarf Foundation.