VERTO CEO, Ron Maxwell, today welcomed a number of initiatives announced in the 2014-2015 New South Wales Budget that will boost both the training and apprenticeship sectors.

Mr Maxwell said the New South Wales Government’s decision to increase the vocational education and training budget by $125 million on last year’s expenditure will benefit many job seekers. "While we are waiting to see the detail on a number of announcements, we welcome the Government’s $95 million commitment to Smart and Skilled," Mr Maxwell said.

"Contestable funding for subsidised training in New South Wales through the Smart and Skilled program is a fair approach to providing training. “We look forward to the implementation of the program in January 2015,” Mr Maxwell said.

“The Government estimates the minimum requirements for apprenticeship sign ups as part of government infrastructure contracts will create at least 1000 new apprenticeships.

“We are particularly pleased the Government will continue its hospital construction works program in Dubbo, Forbes, Parkes, Port Macquarie and Tamworth as this will drive apprenticeship sign ups in these local regions.

“All of these initiatives, along with the Federal Government’s introduction of Trade Support Loans, will significantly boost our apprenticeships sector,” Mr Maxwell said.

Mr Maxwell has also today welcomed the Government’s commitment to extend its support to small business by providing payroll tax relief under the Jobs Action Plan, to remove three business taxes and to reduce the WorkCover premium by five per cent. “Removing taxes and reducing premiums supports both economic and employment growth."

“I look forward to seeing further details shortly from the Government regarding the changes relevant to VERTO’s service areas in particular,” Mr Maxwell said. 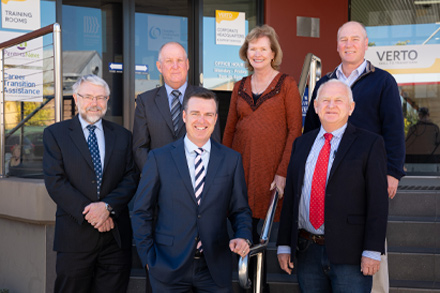